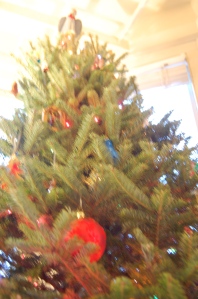 There’s nothing quite like the smell of a Christmas tree. Especially right after you’ve brought it into the house and right before your nose gets used to it and you cease to consciously smell it. The fresh-Christmas-tree scent is one of the few scents I wish I could get my nose to smell for the whole season, but I know that by tomorrow I will have to stick my face directly into the branches to smell the tree. In a week, I will be crushing needles to smell it.  I can’t be the only one who’s experienced this.  In fact this is probably why Yankee Candle is able to do such an appalling trade in balsam-scented candles.

Right now however, the tree is two days old, and smells just like a little piece of the forest in our newly cleaned living room. And the best kind of snow is falling outside: The kind that looks pretty, collects on the ground, but does not make the roads treacherous.

And because I’m grateful for all these things, I thought I’d write the blog I failed to write a few weeks ago. Inspired by a few other people’s Thanksgiving posts, I had meant to make a list of five little things for which I’m grateful. Not the big things (wonderful husband, awesome parents, brother and future sister-in-law, roof over my head and job that I love) but five little things that make me happy every day. Things that seem so good that they might be revoked by the government.

1) Happy Mail. Happy Mail is anything that arrives in our mailbox that isn’t a) junk mail b)for a long-gone tenant or c) a bill. My mother and I coined this phrase when I got my own apartment in 2001 and was amazed that everything in it was a bill. So my mom started sending me cards to break up the monotony of getting bills and overdue notices. Sometimes she wrote “Happy Mail” on the envelope itself. Now she sends Happy Mail to my 11-year-old cousin in Maine, so it’s now a tradition and that’s kind of cool. And bonus: Every day during this season, there’s at least one piece of Happy Mail from someone in our mailbox.

2) The Beach. We don’t live next to the most beautiful beach in the world, but we do live right next to the ocean, and for anyone who was raised inland, that is the most awesome thing ever. When I wanted to go for a walk as a kid, I had to walk through neighborhoods. If I want to go for a walk now, I can walk through a park and along the beach. Yes, the beach is sometimes pretty nasty. Yes, they reopened the landfill and now it smells gross. No, there’s really not much maintenance of the beach in winter. Still, being able to walk down the street and see the ocean is a huge luxury for me. And it’s always an adventure: There were starfish all over the beach yesterday.

3) Our Garden. Our garden took very good care of us this year. From March to right now, we raised something like 15 different crops in our tiny backyard. Some of those crops foundered (I think I tried to plant squash three times) and some boomed (the tomatoes took over) and as a result we have a lot of frozen and dried produce stored for the winter. We also still have things growing. We’re trying to raise winter spinach, radishes and garlic in cold frames. It may not work, but if it does, we will have fresh produce in January.

4) Decent gluten-free food. When I learned, at the age of 25, that I couldn’t eat gluten, I was shattered. I had no idea what gluten was, but I knew it was in my favorite foods, so I restricted myself to vegetables and meat and eggs for a month or so. I mourned the food I’d been eating all my life. I tried the substitutes in health food stores and found them wanting. Now, seven years later, I no longer feel like a second-class citizen when it comes to food. My husband makes the best gluten-free pancakes, cookies and bread, and thanks to an enterprising woman from Weston, I can order a gluten-free pizza almost anywhere. And I’ve finally found decent gluten-free sandwich bread in our regular grocery store. It’s a Christmas miracle.

5) Writers who have Facebook. I am fortunate to be a member of not one, but three groups of writers. There’s my old writers’ group, Writers on the Rocks. We’ve been together, in one form or another, for something like eight years. There are all the journalists I’ve worked with and met in the last decade. And then there are all the new writer-friends I’ve met through my MFA program at Fairfield University. I  love reading all of their blogs and seeing what’s happening in their lives. And let’s face it; they make my Facebook newsfeed a clever, well-punctuated place. Reading their statuses gives me faith that our language is not dying. And that really is something to be thankful for.

4 thoughts on “Trees, snow, and my belated list of thanks.”