We were going to stay. We might have been fine if we stayed.

But when the City of Bridgeport ordered a mandatory evacuation on Saturday afternoon to people in my neighborhood ahead of what was, at that point, Hurricane Irene, I decided that we weren’t going to take our chances with the storm. We packed our bags and headed to my family’s place.

We were back in less than 24 hours. The storm seemed like it had been over-hyped. We didn’t see any downed trees or accidents on the highways. Everything was great. Then we  turned onto our street. The Long Island Sound, which normally keeps to itself,  had come inland, about half a mile. 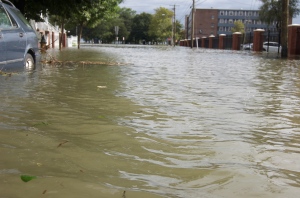 Usually, when you stand in this spot, you're looking down at the Long Island Sound, not wading in it.

Our whole neighborhood was under water. We parked the car several blocks away and started wading. I had visions of our living room furniture floating, or worse, of our house tilting in the saturated soil, and falling over, like so many trees shown on the news.  But when we stepped out of the water and onto the porch, we realized those fears were unfounded.

We shone our flashlights into  the basement. It was flooded almost to the top. Paint cans and other debris floated by. We couldn’t see it, but our washer and dryer and the big chest freezer had floated up and tipped over. It all seemed like a little too much right then. I’m not sure what pushed me over the edge. Maybe it was all that water, reflecting the light from my flashlight back up at me. Maybe it was watching a pitcher I’d used for drinking water floating by in the filth, but that’s when I began to panic.

Things didn’t end up being so horrendous. Two of our closest friends, whose own power was out, had us over, grilled us some hot dogs, and came back to our house with their pumps and a case of drinking water. Our neighbor let us use her electricity. I hope that someday we can be as much of a help to them as they were to us. 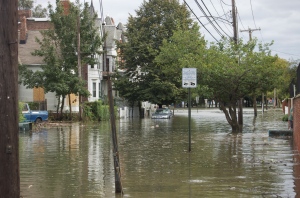 This is what it looked like before the drains were cleared.

This is the best part – it was our neighbors and friends who cleared our street of water. The gentleman who lives across the street from us waded out with a broom and began pushing away the debris on the closest storm drain and then clearing leaves, fallen branches and garbage from the drain with his hands. We heard bubbling from the center of the street. Several of us rushed out with rakes and sticks and poles and our hands and spent the next hour pulling leaves out of drains. You’d clear one and there’d be a sudden strong pull on your hand as the water began to fall from the street into the sewer below. And then, if you’d cleared the drain enough, a small whirlpool would appear. People came along and took cell phone videos of us, standing up to our thighs in floodwater, clearing drains. I’m sure we’re on YouTube somewhere. Within a few hours the street had drained completely. We would still have standing water if it weren’t for our neighbor’s idea.

This morning, I took a walk down to the small, usually nasty beach at the end of our street. I had to walk through some weird Lovecraftian muck to get there, but when I did, I was surprised. The beach was higher than usual. There was about a foot of new, clean sand. The water was still and shining and the sun was out. A beautiful beach after an awful storm is so cliché; the writer in me was sickened. But the Bridgeport resident who’s had enough of clouds and brackish water was happy to see it.

I once read an article which said that people don’t like to read positive, inspirational blog posts.  Well tough noogies. Here are some lessons I learned yesterday:

– There are no winners in an argument about whether or not you should evacuate your home.

– Mandatory evacuations are not actually mandatory.

– We are a nation of idiots with cameras in our cell phones.

– Good friends are the best resource ever.

– Knowing and being willing to help your neighbors is the smartest thing anyone can do.

– Teamwork can clear a flooded street a lot faster than Public Works can.

The shovel has returned.

I woke up with a plan this morning: Coffee, shoveling, novel, in that order.

My plans to shovel were thwarted the instant I got out the door. I loaned the snow shovel to one of the neighbors, who is from a warmer clime and who looked like he needed to dig out his car in order to go to work. He accepted the shovel and took off down the street with it. That was an hour or so ago. Possibly he’s digging out a friend. Maybe he’s just running around, yelling “Whee, I stole a shovel.” Whatever he’s doing with the shovel, I haven’t seen him in a while.

I’m a little irked about this, because I  enjoy shoveling. There are a lot of reasons to like it: It’s cheap exercise, I get to interact with the neighbors, I get to be outside and there’s the instant gratification of physical labor.

I never do any of those things, but I can.

Why? Because of my childhood, of course. END_OF_DOCUMENT_TOKEN_TO_BE_REPLACED