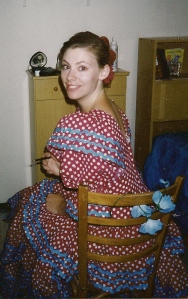 Me, in a borrowed dress, preparing for Sevilla's Feria in 1999.

UPDATE: The webcams appear to no longer be in use at my old study abroad program. At least, the feed from those cameras is no longer posted on the web page. I know that the friends I made in Spain read this blog, so I don’t want to spread misinformation.

Last night, overcome by a fit of nostalgia, I Googled my old study abroad program in Seville, Spain. I was appalled to discover that the program had installed webcams.

There is no explanation on their website for the cameras, but in September, National Public Radio did a segment about colleges installing webcams for parents who want to take a look at their kids eating in the dining hall, getting their mail or whatever. I’m assuming these Spain-cams are the same thing.

This bothers me. When I went to Spain in 1999, I was going abroad to get away.

The pretext was that I was going for my education. And I did go to school there, but the classes were a formality. My real education began on my second day, when I had to use my 10 years of in-class Spanish instruction to order a booklet of stamps, and no one was present to help me. I remember the impatient look of the stamp vendor, my own terror when I couldn’t remember the word for stamps (it’s sellos) and my elation when money changed hands and the stamps were in my pocket. I almost did a jig in the street. I had done it. I ordered the stamps myself, with no one to help me. It felt like the first thing I had ever done without help. I was, all of a sudden, capable of anything.

Now I will admit that the webcams’ view of the students is very limited. The cameras are mounted in inoffensive places (the halls, the front door, the courtyard) and are designed to capture students at their most angelic: On their way to class. Not much damaging footage can be captured in the narrow  halls of my old center.

What I’m protesting here is the point.

The four months I spent in Spain were some of the most important weeks of my life. Despite the fact that my room and board was paid for by my parents, I was far away and had to fend more or less for myself. And I learned several important lessons: I had to accept the fact that I didn’t have as much money to travel as some of the other students did. I had to be judicious with what money I did have, and accept the fact that I was simply not going to Ibiza for a weekend. A related lesson, which I learned on a surprisingly cold and rainy night in Madrid, was that money does, in fact, run out.

When I came back from my study abroad, I was 21, and I finally thought of myself as an adult. Whether my parents agreed with that was beside the point. I home a more confident person, knowing that I could exist in another country, speaking a language that is not my own.  I wonder if I would have felt as independent if my parents let me know that they were keeping tabs on my activities, watching me go to class (or not) via webcam.