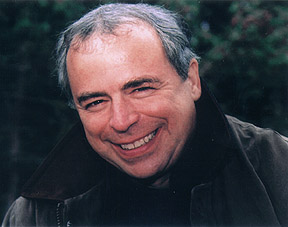 Richard Russo thinks of himself as a comic writer.

I had the advantage of being able to interview Richard Russo for my newspaper’s entertainment section just as I was writing a craft essay about him for my MFA program.

Russo was coming to town this past June to discuss That Old Cape Magic. I had just finished reading Empire Falls, and I was very excited to speak with him.

During the interview, Russo surprised me by referring to himself as a comic writer. In fact, he compared himself to Mark Twain, with whom he appeared in Granta magazine this summer. That ran counter to my observations as a reader. Sure, there were moments of humor – pure slapstick humor, actually – within the 483 pages of Empire Falls. But the book was more of an American epic, not the work of a humorist.

I didn’t get it until Russo told me that he considers people to be funny.  Just watching people being people, he said, can be enormously funny. That made sense, because Empire Falls is a lot like sitting in your hometown, having coffee at the diner and watching everyone you know as they walk by, living their lives.

And he’s right – people are funny. We’re funny in the same way that our cousins in the monkey house at the zoo are funny. We have basically the same motivations, and our attempts to get what we’re after can be just as clumsy and brash. And that can be hilarious, or it can be horrible.

“I do gravitate toward folly,” said Russo. “Sometimes there are tragic consequences to human folly.”

For the full story, click this link. For the craft essay I wrote about Russo’s graceful management of multiple viewpoint characters, read on.