Chapter 10 of DinoLand is live right now, and it’s a big one.

The Night of the Bucking Brachiosaurus is finally drawing to a close (and it’s about time, since we’ve been reading about it since what? March?) and it’s time for things to happen. Perdita and Doug have their big confrontation, and we finally learn what Steve’s been up to this whole time.

Go over to Geek Eccentric and check it out.

I hope you enjoy reading it as much as I enjoyed writing it.

And then, like so many network shows, DinoLand is going on a hiatus. Max and I are taking a break for the holiday season (we don’t think you all are going to want to read our work at the very beginning of the new year) but we will be back the first Sunday  of February with the beginning of Part II.

It will be a blast and we can’t wait for you to join us!

Chapter 4 of DinoLand is posted at Geek Eccentric as of half an hour ago.

In this month’s installment, the zoology team attempts to help a sick brachiosaurus. How do you do that? With armored vehicles, a team of acrobats and tranquilizers fired from a cannon. While praying. With a few ambulances on standby.

How does it go? That would be a spoiler. Click over to Geek Eccentric and check it out.

Just a quick post to let you all know that Chapter 3 of DinoLand is live today at Geek Eccentric. Head on over and check it out because the plot is thickening and it is getting real.

As an aside, I’ve been meaning to write more than these monthly posts about things that are getting published. I actually have several posts started, but the first month of our son’s life has gotten between me and this blog. That said, I’m hoping to post more in the next few weeks; I have some projects I’m working on now that the school year is winding down and I’ve also just wanted to blog more. 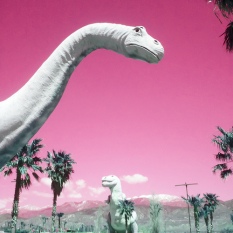 I have some pretty awesome publishing news. Are you ready? Get ready.

Geek Eccentric, a site I’ve been working with for a year now, will be serializing a novel of mine, DinoLand, starting on Sunday, March 2, and running the first Sunday of each month.

I’ve been working with an artist, the fabulous Max Farinato, on this project, and I am excited to be able to finally share this news with you all.

DinoLand is a book I started working on several years ago, as a National Novel Writing Month project. I’d planned it as a novel, but after Margaret Atwood’s success with the webserial Positron, I’ve been interested in trying that route myself.

What’s DinoLand about?
DinoLand is set in a sprawling, Disney World-like amusement park which has introduced live dinosaurs as an attraction. The park saved a dying mill town and its leader is revered as a genius and a hero for his work. However, a new attraction is being planned, one that may not be as beloved as the herd of Brachiosaurs.

We need to talk about Jurassic Park.
Let’s address the pink Tricerotops in the room. This theme park hasn’t got much to do with Michael Crichton’s Costa Rican Island, or even with Velociraptors. The park in this book is very different from the one in Jurassic Park. Let me put it this way: the real monsters in this book aren’t the big lizards.

Rawr.
Have I mentioned that I’m excited about this? Because I am. So. Excited. I’m a little nervous about starting a webserial around the same time that I have a baby, but this is a project I’ve wanted to do for a long time, and I hope you’ll be interested too. So stay tuned for more announcements, links and posts. Let’s get prehistoric!

I think I might have mentioned in my last post that National Novel Writing Month is not about quality; it’s about quantity.

A group of friends and I celebrate this, by exchanging our best and worst sentences at the end of each day of National Novel Writing Month. We started this years ago, when most of us worked in the same office and after we sent the best-worst email, you could hear the others laughing at their desks. I am aware that it’s Saturday, and not many people check blogs on the weekend because they’re away from their computers and out living their lives, but I thought I’d extend part of the tradition to the this blog.

In the spirit of NaNoWriMo, here’s a sample of some of the worst writing this week has produced. Of the 7192 words I’ve produced so far, these are the most unfortunate, and that’s saying a lot.  Normally, I don’t like to share my creative writing online, but since all of this is really bad, none of it is likely to make it into the finished manuscript and I don’t feel the need to keep any of it a professional secret. Some of these sentences are lame. Some are bizarre. Some are just stupid.

Nov. 1 – Amazing how a person can be so afraid of something one minute and so fascinated by it the next.

Nov. 2 – “Steve, what about the kids? No one’s going to want to come here if you’re killing their favorite dinosaurs.”

Nov. 3 –  She removes her purse from between her arm and ribs and gestures toward the window with it. (The logistics of this one boggle the mind.)

A little anti-climactic, I know. But we’ve only been noveling for four days. I’ll try to write really horrifying ones in the next week. I promise  to get back to you all with a full seven days of lame sentences next Saturday.