I wore it last night because it reminded me of a feeling I get when I read her early work.

It’s olive green, and loose, and I wore it with sandals and a poncho and a bag with tassels on. I chose it because I’m a synesthete and I think of the world in terms of color and taste. The whole ensemble made me feel a little like one of her essays from the late ’60s, or like the sound of a Joni Mitchell album.

And when she signed my copy of Play it as it Lays, she looked up and complimented me on the dress. “I’m partial to that color,” she said.

When I was a young writer, hungry for wisdom and mentorship, that comment would have been anti-climactic for me, coming from the mouth of one of my heroes.

I first read the work of Joan Didion as a young journalist. An editor, choosing my name from the hat in our newsroom’s Secret Santa, gave me a copy of The White Album. It was exactly what I needed at a time when I was becoming jaded about my job. Didion’s essays lifted me out of the drudgery of school board meetings and graduation speeches. Her work taught me how to see the people and the pathos in my news stories. Her prose taught me how to describe them. Every essay I read was a challenge to be a better reporter.*

There are certain people who take sharp notice of the world, and who transmit their mindsets with a startling clarity.  Didion is one of these. It was a shock to discover her work. When I was a self-centered 23 year-old, she made me able to see a larger world through older eyes. I think I grew some compassion when I read her essays.

I’m proud that I’m over that stage.

Today I’m happy to know that she liked my dress, because it means that those eyes, which have noticed so much and which taught me how to see the world as a writer, had seen and acknowledged me, too.

*I loved that book, but I never finished it. I’d been reading it slowly, savoring it essay by essay. I’d read and re-read an essay, then put the book away and spend a few days trying to emulate Didion in the stories I wrote for my daily. One day, the book slipped away from me. I’ve been looking for it for a decade, and I refuse to buy another copy, because I’m convinced it’s around here somewhere and my editor gave it to me and that means something. That was six or seven moves ago.

The official photographer* has sent me photos from my e-book talk and reading of Beware the Hawk at the Watertown Library last week. I’m only going to share a few shots with you here because there are something like 20 very high-res photos and, also, I know all of the people in the photos, so reading the captions for all of them would read like a trip down memory lane.  But here are a few shots. Let me know if you can find the hawk circling outside the window. I’m told it was there, but I can’t find one in the photo. 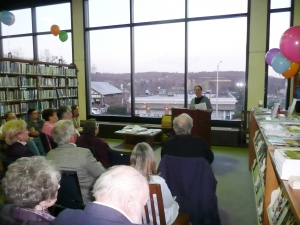 Deborah Weinberger, president of the Watertown Library Association, speaks about the library's new collection of e-books and provides the introduction. Note the "e-book" balloons to the right and left. 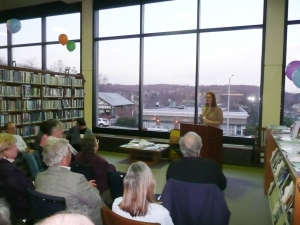 I speak about e-books, clutching my index cards as if I could absorb all the information written on them through the skin of my fingers. 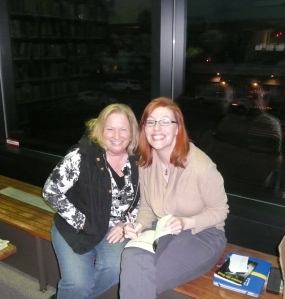 Me with one of my parents' neighbors during the book signing. I used to get in all sorts of trouble in her yard. I fell out of one of her trees, I accidentally injured her daughter's bunny, I contributed to the decay of shrubs on her property by building a fort in the hedge... In fact, now that I think about it, it's a wonder she came out to the reading. 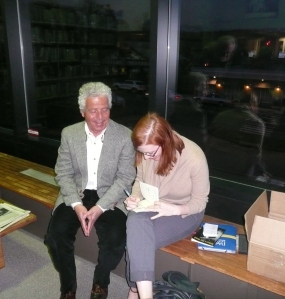 This is Mr. Fava, formerly of Watertown High School. I was assigned to his study hall as a freshman. I did no homework in this study hall. Instead I wrote novels. I am proud to say that you will never, ever see any of those novels. 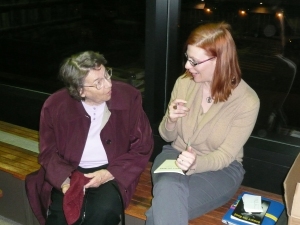 And that's my grandmother.

UPDATE & CONFESSION:  I misused an apostrophe in the original title of this post; the one that went out to Twitter and Facebook as a status update. I wrote “weeks'” instead of “week’s.” I know. Not a big deal. Still, I’ve posted about apostrophe abuse so often that I feel I must own up to all apostrophe crimes. Feel free to report me to Strunk & White.

The official release date was tomorrow, but I’m told that my  book, Beware the Hawk, is already available on Amazon.*  There will still be a lot of hubbub tomorrow – I’m starting my blog tour over at WordVagabond and the book will be available at Vagabondage Press (no relation), but this is like a soft opening. 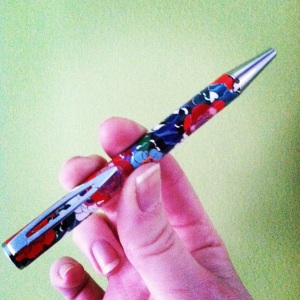 A mentor gave me this pen to use at my very first book signing. I was bummed that I wouldn't be able to use it - until now.

So, for those who have asked, Beware the Hawk is an e-book. This is awesome for lots of reasons – it’s easy to download, it stays in print forever, it doesn’t weigh anything and it’s not killing trees. In short, it’s kinda made of magic. But one thing you can’t do with an e-book? You can’t sign it.

That’s a bummer, because book signings are fun. One of my writers’ groups once published an anthology and held a book signing and it was amazing. I could have signed books all night. I considered coming home and signing every book in my bookshelves, but luckily my roommate at the time, (who was also in the writers’ group, but who also had books on the shelves that she probably didn’t want me to deface) distracted me.

Anyhow, I was sort of saddened by the fact that there would be no book signing at first, and then, during a conversation on Facebook, I realized that I don’t need to have a physical book to have a signing. In fact I don’t even need to be in the same room with everyone to have a signing. Here’s the deal.

From now until next Monday (Jan. 23, 2012), people who buy the book can send me an email with their mailing address. I’ll send you an autographed Post-It that you can put on your Kindle, Nook or computer while you’re reading my book. Not very fancy, perhaps, but who doesn’t like getting mail that’s not a bill?

So, if you want your autograph, send your mailing addresses to annjoconnell<at>gmail<dot>com. (Just until Jan. 23. Because this week is a special week.)

Then keep an eye on that mailbox. Now, if only I could figure out how to do a virtual reading.

* If you want to help a woman out, get it from the Vagabondage Press site. Both the publishers and I get better royalties and you get the book in three formats. Also, why reward Amazon for releasing the book early?