Just a quick post today: I’m working on freelance projects and prepping the fourth chapter of DinoLand for its publication on Sunday (there will be be big doings in Chapter Four, for those who have been following along. I promise you blood, my friends.)

That’s right, freelance projects! I love teaching as an adjunct, but I’ve been wanting to get back into the freelance world for a while, and I’ve finally had the opportunity to do that. It’s part of my long-term goal: freelance as a writer and editor until my books start earning me money and I can live the life of a full-time author. Then I can just sit in my office, eating bonbons and killing characters all day like George R.R. Martin. 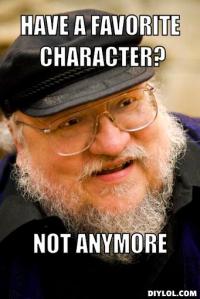 Speaking of George R.R. Martin, it’s taking me a long time, but I am actually working on the final book in the Resistance series. No really, I am. The last book has a title and a new protagonist and everything. I know that my books are under 100 pages (as opposed to Martin’s 3,000 pages) and you’d think I’d be done by now, but as it turns out I have a lot of loose ends to tie up and I’d like to do that well, so it’s taking longer than I’d like.

What I can tell you is that the new protagonist is male, which is new for me in this series, and that we will finally find out what happened to the mysterious package in Beware the Hawk.

Also, the readers’ survey – I have not forgotten my “What Are You Reading” survey, which still needs a bigger sample size. (A lot of people read literary fiction, and almost no one reads philosophy. Descartes would be disappointed in you guys.)

And that’s it for me. I will post more later. I’ve been working on two posts for several weeks, but work and the baby have gotten in the way. Eventually both posts will see the light of day. At least, I hope so.

2 thoughts on “Freelance & fiction & the third Resistance book, which is definitely being written.”