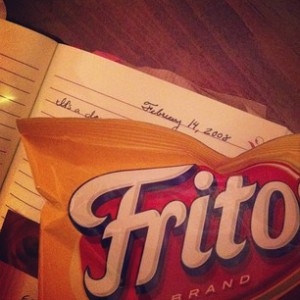 Last night, in a fit of oh-no-Valentines-Day-is-coming, I went online to the font of all DIY wisdom, Pinterest, to see if there are any new ideas for Valentines Day floating around the Internet. And you know what? I’ve discovered that the crafts that girls used to make for their boyfriends in high school are alive and well among grown women. I’m talking about personalized scrapbooks, jars of reasons why you love him, handmade photo frames.

Forgive me ladies. I know handmade is better than store-bought, and I know it’s the thought that counts, but I just don’t buy that any man (or any person, really) would want any of those things.

So then I was curious. I went over to Google to see what guys were saying women want for Valentine’s Day. I think the gifts for ladies have been pretty clearly laid out by Hallmark and similar companies, but I was curious to see what the guys said.

On a couple of lists I read? “Amp up your usual hangouts” (this appeared to be code for do nothing differently than you would normally do) and “spend the day in bed.” Fascinating.

I really think the Askmen.com gentlemen and the ladies at Pinterest should be taking each others’ V-day suggestions. There might be fewer lackluster Valentine’s Days in the world.

I gave up and went over to Twitter. Scrolling down my feed, I came across this tweet from musician Amanda Palmer.

full disclosure: i never do valentine's day shit, never have, and tell partners to forget it. oppressive commercialization of love shit.

Palmer’s tweet gets me right where I live because that sort of unapologetic, idealistic declaration is the sort of thing I feel in my soul. If I were able to reshape the world*, I would leave Valentines Day out, because for me romance doesn’t look like pink and red hearts, because companies are capitalizing on our affections and because there are a lot of people who are already lonely and don’t need Valentine’s Day to make them feel worse.

But here’s the thing – I still celebrate it.

I guess I do it because it’s expected and there is some social pressure, but that’s not the whole reason. On the one hand, I do think it’s an example of capitalism on steroids, as Christmas is. On the other, I think there’s something worthwhile underneath the avalanche of plastic pink hearts and cheap chocolates.

Because I was curious about how other people felt about the holiday, I asked people on my Facebook page how they felt. I got a range of answers – some people love V-day, some people celebrate grudgingly – but mostly I was surprised by how many people’s responses fell into a gray area. Many people celebrate in a small non-commercial way, with a special meal or with parents, children and students. One commenter wrote that’s good to celebrate love with her family. Some people celebrate alone, and cheerfully, with heart-shaped Krispy Kreme donuts. (Jealous!)

A couple of people wrote that celebration is okay, but that cherishing a relationship year-round is more important.
“It’s awfully easy to make the romantic gesture, it’s much harder to maintain a consistent kindness,” commented writer Elizabeth Hilts.

And they are all correct. Maybe that’s why I can’t pull a Palmer and leave the holiday alone for good. Because Valentine’s Day exists, and it’s nice to celebrate love in a small way, even if it’s far more important to celebrate love year-round. I’d love to get some more input on this, if anyone wants to comment below.

Anyhow, unlike Palmer, we are celebrating this year although not in a Pinterest or Askmen.com kind of way. Not that I bought anything with a red or pink heart on it, either. Instead I’m falling back on my tried and true plan for Valentine’s Day, one which has gotten me through many a V-day: a haiku and a bag of Fritos.

It’s much less effort than a scrapbook and he seems to like it. And I’m willing to bet that when I wake up tomorrow, he’ll be there holding out his standard Valentine’s Day offering: breakfast with a side of haiku.

*Actually I think the only people served by this holiday are people who have been dating for less than three months. Because that’s when Valentine’s Day is appropriate, when a person is wracked by endorphins, infatuation and insecurity. If I reshaped the world I would institute mandatory Valentine’s Days for every couple on their three-month anniversary.