In my book,  I wrote a main character who is addicted to her iPhone. The character’s cell phone addiction was meant to be a commentary on all the people I saw hunched over their iPhone displays, gabbing about apps and texting their ways through life, rather than living it. I wrote the book before I actually had an iPhone, * but this may or may not have been hypocritical on my part anyhow, since at the time I rewrote Beware the Hawk, I possessed what my husband referred to as a Crackberry. 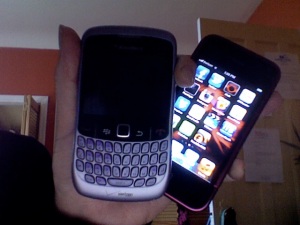 Smartphones have been making me dumber for years.

But I hardly used the browser. I didn’t play Blackberry games. I only communicated with one person (my editor, actually) over the messenger. Then my Blackberry died, and I got an iPhone.

All of a sudden, I understood. There were no tiny keys to wrestle with! The camera was not as good as the Blackberry camera, but I could have more fun with the photos! The touchscreen was so big that tweeting and Facebooking from my phone were a pleasure! I could play Words with Friends! I suddenly had GPS! Now I could see what all the Angry Birds fuss was about!

I know. That’s a lot of exclamation points, but I think that’s what the i in iPhone is. Turn it upside down and flip it around and what you get it is “Phone!” And that’s the iPhone. It’s not a phone. It’s a Phone! And it’s addictive.

Now I’m trying to break myself of the cycle of obsessively checking my phone, which is as rude as it is worthless. I’m pretty sure that having a smartphone is making me dumber. Here are some examples:

So, I’m stepping away from the phone and, to some extent the Internet, this summer. I’m not “quitting Facebook” or giving up my phone or anything dramatic, but I am going to set some limits.

Right now, my iPhone is hidden under a pillow in another room so I won’t hear it buzzing. I have disabled all Push notifications for my social networks. I will not pick it up until I have written a required number of words. I am checking email only a few times a day. I’ve put all my appointments onto an actual desk calendar that I can see. Who knows? Later I may make myself write my husband’s phone number on a piece of paper 50 times the way my fourth grade teacher made me do with multiplication tables when I was being punished for something.

*In all honesty, I wrote the first drafts before iPhones were invented. The original phones were just regular 2001 phones. I was all kinds of excited to add iPhones last year and write the scenes as an indictment of iPhone users. I think this is called Karma.

4 thoughts on “Putting away the iPhone and stepping away from the laptop.”