A couple weeks ago, I sat across from one of my professors at a coffee shop. We were discussing my novel. I had just finished the first draft of it and I was obsessing over several minor plot points because I’d shown it to a couple of writers’ groups and gotten conflicting reactions.

My professor sat patiently as I allowed my OCD* to ride roughshod over my common sense and my ability to remain calm. After about 20 minutes of listening to my nonsense, she cut me off.

I blinked. I belong to three writers’ groups, two of which meet monthly. I’m headed off to my final residency for the Fairfield University MFA program. All of these groups require substantial writing samples from me on a regular basis.

I need to feed those beasts. And I have just the fodder for them: a 273-page, mostly unread and largely un-workshopped novel. I mean, come on. What else do I have to hand to my writers’ groups? A sheaf of angsty college poetry written in Spanglish, complete with coffee stains and cigarette burns? Darkwing Duck fan fiction from 1992? Because that’s what’s left in the bottom of my filing cabinet. 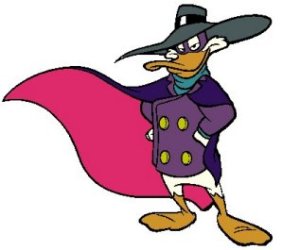 "I am the terror that flaps in the night. I am the fanfic that lurks in your past."

I communicated this to my professor, leaving out the bit about Darkwing Duck.

“Don’t bring anything. Or you know, bring something else you’re working on. But don’t workshop your novel now.”

My professor told me to fuggedaboutit , literally. She said that I needed to protect and incubate the work. She told me not to look at it, or think about it, for at least two weeks.

“I know that might be hard for you to do, but you have to try,” she said, and looked almost apologetic.

She needn’t have. It wasn’t hard. Not even a little bit. My inner procrastinator seized onto that piece of advice, and by the time I skipped out of that coffee shop, I had already pushed all thoughts, worries, or concerns about my book to the very back of my brain. I walked out of there carefree. I had permission to forget about my novel. Great! My professor had let me out for recess!

There is a problem with this. The problem is that my professor’s advice had two parts. The first was to forget, and the second went like this:

“In two weeks, sit down and read the whole thing. Try to do it in one day. Read it with a legal pad in hand, as if you were reading something written by somebody else. Then you will begin to see what changes need to be made.”

Oh dear. It’s been two weeks. And I am having a hard time resurrecting my interest, enthusiasm or desire to look at my first draft. I can’t even write other things. I just got back from a writers’ retreat, at which I wrote at least 1,500 words of another two projects. All of it was crap. All the sentences were Subject-Verb-Noun, the level of the most basic Dick and Jane reader. (Jane writes novels. Jane drinks wine. Booze doesn’t help.) I lost my mojo, and I don’t know where to look for it.

Actually, that’s a lie. I do know where to look for it.

Because as soon as my prof told me to forget about the novel, I (as I stated earlier) pushed all of my worries and fears about that novel to the very back of my brain. I opened a mental closet door, chucked in all my concerns about the novel, then shut the door quickly before anything else could come tumbling out of that closet and walked away quickly. Now I’m loathe to return.

Not only have I enjoyed a stress-free couple of weeks, but I don’t want to go rooting around back there to find my enthusiasm for my novel.

Here’s an example of some of the other items I’ve housed in that part of my brain:

• Everything I know about the phrase “mill rate”

Good lord. I’ve put my novel behind the Gee-I-hope-I-never-have-to-think-about-this-again door. Why? I have some theories.

It could be plain old fear of failure. (Ahh! What if I work very hard and fail?)

It might be fear of success. (Ahh! What if I publish it? Then people will hold me responsible for what I wrote!)

It could be something I like to think of as Queen Midas Syndrome. (If I touched it, it’s already gold. No need to touch it further.)

It could be my short attention span. (I should work on my novel… Ooh! Something shiny!)

It could be laziness. (I’d rather play Scrabble on Facebook.)

It could be that it’s summer. (School’s out!)

It could be any of those things. Or it could be something else. But while I was typing the above list, I realized something. None of the bullet points are valid excuses for not printing out my novel (an exercise that takes my printer an hour to complete) and reading it some time this week. I mean really. I’m too arrogant to fear failure, I love smugness too much to fear success, I’ve never been diagnosed with ADD (*or OCD, for that matter), and although I’m lazy and it is summer, neither of those things has ever kept me from doing things that I hate. That leaves Queen Midas syndrome, but who cares? It doesn’t matter why I’m making excuses for myself. It matters whether or not I pay attention to the excuses.

Well then. Recess is over. I’m printing it, and I’m reading it, just as my professor suggested. But I will ignore her advice about submitting something else to my writers’ groups. They’re getting chunks of novel this month. After all, I am lazy.