It’s been a while since I blogged about anything embarrassing, so here we go.

I think I’ve mentioned that I have an overactive imagination and that I invent imaginary bands. That’s because I don’t believe that my inability to read music/write songs/play an instrument should keep me from feeling like a rock star. This system works well. I recruit other people who can’t play, and we have imaginary rehearsals, imaginary tours, with imaginary gigs at imaginary venues.

Does anybody else do this? Because I put a lot of mental energy into my longest-running project, Sister Transistor, an imaginary all-girl rock band.

Sister Transistor boasts a mixture of real and imaginary band members and a set list of covers which we pretend are original songs. We have lots of pretend drama: Our imaginary bass player, Pangaea is always threatening to quit and join the eco-terrorists who bomb Japanese whaling boats, while our pretend lead guitarist, Beth Hammerdown, recently attracted attention when she became a spokesperson for the Tea Party. It’s an imaginary public relations nightmare.

The whole band thing is an elaborate fantasy that’s been constructed, bit by bit, over the past three or four years. Until recently we were happy without an imaginary album, but since I was learning Photoshop this summer, I decided to use our debut album cover as my project.

Below are my top three album covers. 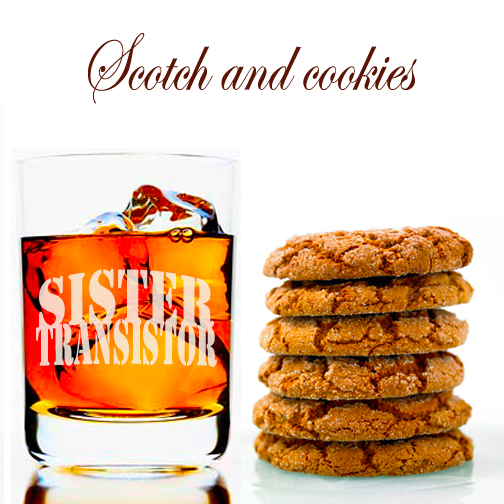 Album 3: I think scotch and cookies really captures the spirit of Sister Transistor. 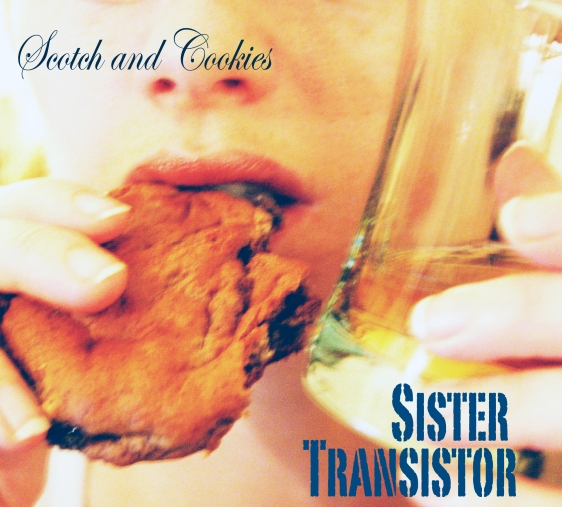 Album 2: I recruited my husband as baker and photographer for this one. Pity the man.

Album 3: This might be my favorite. Sorry for eating with my mouth open.

16 thoughts on “Sister Transistor, or my overactive imagination.”