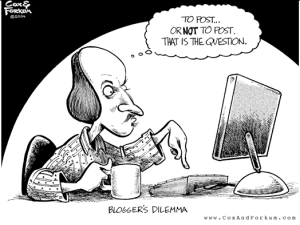 I always came down – more or less – on the side of the journalists, and after last night’s amateur foray into political blogging, I still do.

Yesterday, I lost my mind a little when I heard that Bridgeport didn’t have enough ballots for voters. So I put down the short story I was editing, booted up the local newspapers’ sites, trolled the Secretary of the State’s site, and I blogged and blogged and blogged.

Guess what? Blogging is not the same as reporting. At least for me it isn’t.

If I was actually on the street gathering my own news, I might feel differently about this, but what I was doing was sitting at home in my pajamas, reading reports posted by professional news organizations and putting it all together into one blog post about Bridgeport’s election woes.

It was fun, but it was a lot less satisfying than doing my own reporting. It lacked the weight of a real story, and I didn’t have editors leaning over my shoulder, running trained eyes over my copy, and making sure I was adhering to journalistic standards.

There was one real plus to writing a blog about the voting issues, rather than a news piece. One of the nice things about blogging – and one of the things I suspect most bloggers enjoy – is the ability to write an informal, opinionated post from the first person point of view. I did like that, because the only original thing I had to contribute was my own viewpoint as a Bridgeport voter whose tax dollars fund the local registrar of voters.

My opinion on this isn’t set in stone. Maybe some day in the future, I’ll get inspired to do my own interviews  and news-gathering, and my feelings on blogging vs reporting will change. But I don’t think so – I got out of journalism because I wanted to teach and do creative writing. So unless Bridgeport does something else that makes me rabidly angry, I will be working on my novel, and not blogging the news.

5 thoughts on “Blogging is not the same as reporting.”