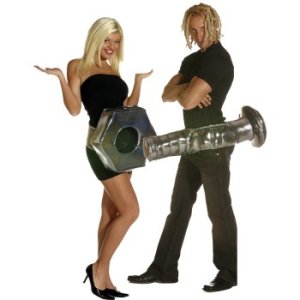 This costume creeps me out, and not because of the obvious pun. I can't figure out whether it's the couple's stance or the guy's hair, but looking at this picture for too long makes me feel dirty.

As soon as my writing samples and third semester project were submitted yeserday, I was felled by a migraine headache. I’m just now coming out of it, which is annoying because today was the day I’d planned to figure out a Halloween costume before heading off to work.

I still have time, but we have a dilemma – my husband wants to do a couples costume this year and most of the couples costumes out there are either saccharine (Cinderella and the Prince) stupid (salt and pepper), demeaning (Hef and a Playboy bunny) or kind of vile (see photo.)

We’ve been going back and forth quite a lot on this. We both like mythology, so Odysseus and Penelope? What about Persephone and Hades? Leda and the swan? That last one is a little too gross.

We’re a more than a little little geeky, so I was pushing a reverse-gender Zoe and Wash from Firefly and he was pushing Arthur Dent and the Hitchhiker’s guide. Since my husband’s been Arthur Dent for Halloween for close to 20 years, I shot that one down. Then we thought of being binary code. Now we’re mining Arthurian legend, but we’re unexcited by the concepts we’re coming up with.

2 thoughts on “The Halloweeners”