There are lots of reasons to like T.C. Boyle. He’s a prolific writer. He produces novels and short stories and succeeds at both. His prose is crisp. His worldview is unapologetic. His humor is dark. His observations on human behavior are visceral. He uses his initials instead of his first name. He looks like a lost member of the Pogues. All redeeming qualities, I know. 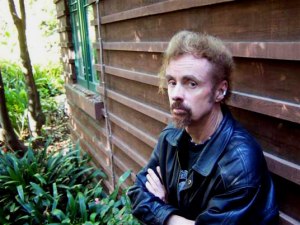 But I like T.C. Boyle for a very basic reason; I recognize his world.

In the past year I’ve read many books. Most were written before I was born. Some were set in Connecticut. Most were set elsewhere. Some explored different racial groups, different geographies, other times and other countries.

Boyle writes about the ’90s, my country, and the people I see every day. And he writes beautifully. To be honest, until this year, I never thought my own ethnic/economic group was interesting enough to merit such polished prose. I’m a white, middle-class, third-generation Irish American living in Connecticut at the turn of this century. What is duller than me? Maybe a box of rocks. No, maybe concrete. But Boyle takes that, and elevates it a little, so that I feel that I’m looking at a museum exhibit of myself and the people I know. Below the jump is the essay I wrote last semester about his collection Tooth and Claw.

Dark humor in the stories of T.C. Boyle

In a seminar last winter, Josip Novakovich said an author should never point out the passages in which he or she has been funny. He backs this statement up in Fiction Writer’s Workshop with the following passage:

“You may take this as a paradigm: If a protagonist in your story cracks a joke, don’t have him and others roll on the floor holding their sides; otherwise, your reader will get the impression that you are congratulating yourself. That’s a bit like prerecorded laughter in a sitcom.” (p. 184)

There is no laugh track for the stories of T.C. Boyle.  In Tooth and Claw Boyle deadpans his way though a series of stories meant to highlight nature’s triumph over civilization. In the process, he lampoons almost everyone: Intellectuals, the upper middle class, working class barflies, and a corporation that looks suspiciously like Disney. The humor is there, ingrained in the narrative, and sometimes it is so entwined with the darker elements of the narrative that it can be hard to see. But since there’s no laugh track, that’s okay. As Novakovich says, “If it’s funny, the reader will laugh. If not, all right, there was no promise of humor anyway.” (p. 184.)

“Jubilation” is an example of a story that works, and I think it’s probably the best piece in the collection. In “Jubilation,” Boyle satirizes the Disney Corporation’s own artificial town: Celebration, Florida. Disney has already created Boyle’s absurd situation: In the ‘90s, the company built a model town, which was colonized by people from all over the United States.  Boyle’s choice of point of view brings the humor to a head.

In Boyle’s tale, our narrator is a wealthy, recently divorced retiree of the sort often found in Fairfield County bars. Instead of growing his hair out or getting a motorcycle — which is how the gentlemen around here tend to respond to divorce — our narrator moves to Florida in a fit of idealism. There, he waits in line with thousands of other people who want to buy real estate in Jubilation, a town set up by Charles Contash, the Walt Disney of Boyle’s piece. As he waits in the sun for hours and sleeps on the pavement, the voice of the narrator is wildly idealistic. He seems to have swallowed Contash Corp’s tripe about New Urbanism and model communities and in the first few pages he calls people “neighbor” in the same way that George Orwell’s characters in 1984 toss around the world “comrade.”

Everybody knew the rules — there was no favoritism here. Charles Contash was founding a town, a prêt-a-porter community set down in the middle of the vacation wonderland itself, with Contash World on one side and Game Park U.S.A. on the other and if you wanted in — no matter who you were or who you knew — you had to stand in line like anybody else. (Kindle version, locations 1770-87)

But when our protagonist fails to get a winning number in the lottery, he turns right around and uses $10,000 of his money to buy a better number off someone else, all the while justifying his actions by citing a spirit of free enterprise. Boyle thus brings the high ideals of equality and fairness low with a self-serving act, and elevates them once more by citing the ideals of entrepreneurship.

This voice provides us with most of the irony and humor in the story. Novakovich tells us that with skillful use of voice, a writer can make anything funny (p. 180). Even if the writer says nothing funny, the voice itself can be enough. The story Boyle tells in “Jubilation” is not a particularly funny one: Man gets a divorce, is lured to Jubilation by promises of municipal perfection and ever-rising property values, and instead becomes victim of hurricanes, the fauna of the beaten-back swamplands and Contash Corp itself.

The narrator refers to himself as a pioneer at the beginning of the tale, and the series of mishaps that befalls the narrator does recall some of the tragedies of the homesteaders. But the cheerful force of the narrator persists even through story’s climax, the eating of a little boy by an alligator. This is a child with whom the narrator is close, but we do not feel the horror of this death. Instead the readers view the situation through the narrator’s self-involved lens. The gung-ho, pompous voice tells us he blames himself, and he is grieving — no really he is — and then he moves on to how the child’s death has made him a better citizen. It’s a dark tale, but I laughed out loud reading it.

An example of a Boyle piece in which the humor fails is the title story, “Tooth and Claw.” The story, about a young man who wins a serval in a barroom dice game, and keeps it in his apartment in a bid to win the affections of a cat-crazed barmaid, was meant to be funny, I think. The situation created by Boyle is absurd enough, but the voice that he uses does not permit us to enjoy it.

For “Tooth and Claw” Boyle again chooses a first-person narrator, a depressed young man, grieving his father and recently moved to California. Unlike the narrator of “Jubilation,” the darker aspects of the story aren’t buffered by an amusing, arrogant narrative voice. There is no psychic distance between the reader and the narrator’s helplessness in the face of his attraction to the barmaid and his terror of the wildcat. Nor are we spared the abuse suffered by the imprisoned wildcat, which is as miserable as it is dangerous.  The serval tears up all the carpeting in the room to make a den for itself and shreds its litter box. It gets its meals at the whim of its terrified owner.  The cohabitation of these two miserable creatures, both trapped, depressed and lonely for their own kind, isn’t funny at any time. I found myself praying that PeTA would enter the tale and set the serval free, or that the cat would bust through the door and kill the narrator so that I could stop reading.

Ludwig wiped the moisture from his face with a swipe of his sleeve, straightened out his hat and came back to the bar, looking jaunty and refreshed. “All right,” he said. “don’t be shy — go have a look. It won’t bite. Or it will, it definitely will, but just don’t get your fingers near it, that’s all—“ (Kindle, locations 3679-97)

Not all of the stories in the collection seem intended to be funny. Since the point of the collection is to highlight nature’s triumph over man, we know from the beginning of each tale that things probably won’t go so well for the human characters. “When I Woke Up This Morning, Everything I Had Was Gone” is heart-breaking. The parallel storyline in “Dogology,” the tale about the feral sisters in India, is tragic. “Swept Away” is very funny, in a slapstick kind of way, but we feel for the central character when he loses the love of his life. Humor is not the point in these stories, but it is welcome. Boyle’s jokes make the expected tragedies easier for the readers to swallow.

“If the emotional tone of your novel is grim it’s good to offer a break,” writes Novakovich, “because unrelieved grimness can grow monotonous. Using humor as a contrast will then deepen the tragic impact of your story.” (p. 179)

Boyle’s humor certainly does that. “Dogology,” “Jubilation” and “Swept Away” are memorable because of the use of humor to describe painful situations. When Boyle’s humor works, it is a dark humor, and that is its appeal.