Actually, what I should say is this: I finally saw the 2009 Star Trek film. (Few movies are truly new by the time I clap eyes on them.) So the vitriol I’m about to spew here is outdated, but still, I can’t contain myself. Because that film was NOT Star Trek.

Yes, it had Kirk, Spock, Bones, Uhura, Scotty, and the rest of the gang. Yes, it had the Starship Enterprise, primary-hued uniforms and phasers set to stun. And it had bad guys and lots and lots of lovely explosions, but that’s where the similarities end, people. It was not Star Trek. It was more like being on a Star Trek-themed ride at Universal Studios.

And the thing was, I actually let down my guard for this film. And for a while, I enjoyed it.

This was me at the start of the film: 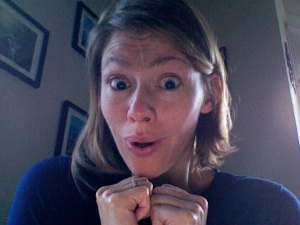 This was me after 30 minutes of Starfleet Academy, Planet Vulcan, Captain Pike and other assorted fan service:

And this was me maybe 20 minutes after that:

Why? Well, since there are spoilers in this rant, I will tell you why after the jump.

Let’s talk about substance. Gene Roddenberry’s Star Trek was always backed by a progressive political agenda.  The original series examined civil rights, the cold war and the advance technology.  Next Generation explored culture sensitivity, affirmative action and sexuality. Deep Space Nine’s stationary setting allowed the show to touch on real-life conflicts, like the war in the Balkans and the ongoing battle between Israel and Palestine.

This movie did nothing to continue that tradition. Nothing! In fact, I even think it moved the Star Trek universe back a few paces. Take Uhura.  Uhura is a groundbreaking character. She was one of the first black characters on television; she’s been cited as an inspiration for entertainers and astronauts. She had the most prominent female role on the show. When I was a kid, I loved her, so I was looking forward to meeting a young Uhura in a recently-written film. The film seemed to promise that her character would be expanded: she was introduced to us as a capable, snarky, self-reliant and brilliant cadet.

And then, Kirk hits on her.

And then he gets in a fight over her, and she stands there yelling “stop it,” like every other woman in every other bar fight in film history.

And then, she strips down to her underwear for no reason.

And then, after negotiating a transfer to a Very Important Position on a Very Important Starship because she’s Very Brilliant and Driven, we find out she’s been having an affair with her teacher at the Academy: Spock. (Spock? Seriously? Did the screenwriters even read a Wikipedia entry about Star Trek before working on this script?)

And if that’s not enough for you, Uhura spends exactly no time doing her hard-won Very Important Job on the Enterprise. Instead, she chases Spock into the lift, into the transporter room, and promises to monitor his vitals while he’s beamed over to the enemy ship, which seems like the space-age equivalent of checking Facebook at work. So much for beefing up Uhura’s character.

And Spock. Really? Our logical Vulcan is involved in a passionate romance with a human, who happens to be his student, right off the bat? And he beats the snot out of Kirk in anger after about two minutes of provocation? Come on.

Oh yes, and film’s creators — probably fearing that the film wouldn’t be able to stand on its own feet without someone from the original series — slapped a pair of pointy ears back on Leonard Nimoy, who was back as Spock from the Future.

Add to that the fact that the writers created an alternate timeline at the beginning of the movie, so they can now do whatever they want to the universe, and my horror was complete. Why not reboot Next Gen? Or Voyager? How about Enterprise? Those actors are probably still looking for work.

Now I’ve seen the review which labels this Star Trek as a good action movie and a bad Trek film, and I do agree. And I’ve been told by other geeky types to calm the hell down, put down the phaser and stop complaining. But dammit, I’m a Trekkie. I’ve been a Trekkie since kindergarten, and this film hurt my feelings.

Yeah, it was pretty, and sprinkled with redshirts, Vulcan nerve pinches, and  little references that only hardcore nerds would get, but really, this film didn’t go anywhere that no film had gone before. In more ways than one, all it did was double back.